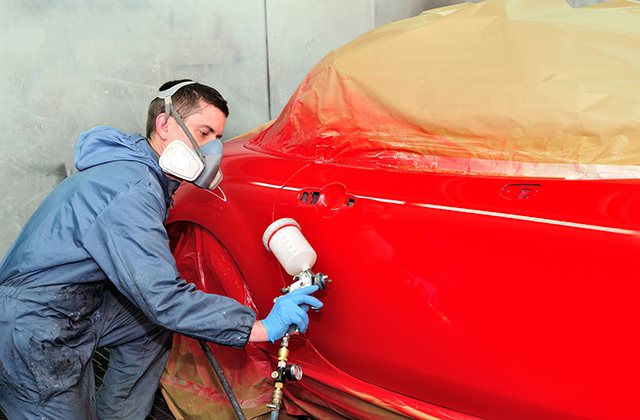 The Short History of Powder Coatings

The essential feature of powder coatings is that the paint is applied in a dry state onto the object. The paint powder is then melted onto the product by putting the product into an oven. Protect your new car’s critical areas against scratches due to road debris, rock chips, bugs and sale with invisible durable urethane paint protection film.

Powder coatings are a postwar invention, when plastics became more sophisti-cated. The powder coating process was patented in 1953 by Dr. Erwin Gemmer.

Until 1965 powder coatings have been only used for functional applications (not aesthetical), where it was applied a layer thickness of 150 to 500 microns. The used powders then were mainly Nylon 11, Cellulose Acetate Butyrate (CAB), Polyethylene, (chlorinated) polyester and thermo curing Epoxies.

The very high layer thicknesses that were the result of the fluidized bed process, were not desirable for many applications. In general counts that the higher the layer thickness, the less smooth the surface texture becomes.

In the US some companies started in the early 70’s to experiment with applying powder coatings by using the now commonly used electrostatic powder gun.

Powder coatings give better protection against corrosion than wetpaints. Wetpaints are mainly used when slickness (smoothness) of the surface structure is more important than corrosion and scratch resistance, like for example in cars. Powder coatings are technically superior to wetpaints except in surface smoothness.

Since the slickness of car bodies is one of the most important properties to be regarded as desirable, they are still wetpainted. Otherwise they also they would have been started to powder coat bodies long time ago.

In the late 60’s and early 70’s there were four basic types of thermal curing resins developed that are still used today. These are: Epoxy, Epoxy-Polyester hybrids, Polyurethane and Polyester (TGIC) resins. Since a few years also TGIC-free Polyester coatings are available.

The number of powder coating plants in the world grew fast since the early 70’s. The electrostatic powder coating process took over the environmentally harmful and labor-intensive wetpaintings.

Only in the early 80’s more commercial applications of powder coatings started to emerge, because the equipment began to drop in price and the initial limited choice of color and shine started to expand rapidly. Thereafter, the growth rate went explosively, and the technique began to displace the traditional spraying on most applications.

As replacement of the environment unfriendly dip galvanizing, there are nowadays highly advanced Sink-Epoxy powder coatings available. When processed properly in a duplex system, these systems can give up at least 20 to 30 years protection against corrosion.

The Principle of Electrostatic Powder Coating

The essence of powder coating is that tiny solid paint parts are charged in a magnetic field.

At locations where field lines are weak, there will group also less powder particles.

By varying the type of raw material and the proportions, the properties of the coating can be influenced.

One of the most occurring problems during the application of powder coatings with Corona guns is caused by the Faraday cage effect, because this technique uses an active electrical technique. A problem that the so called Tribo guns don’t have.

In the Corona technique not all the field lines are everywhere equal on the grounded product. Most field lines pinpoint on the outer corners of the product. On the flat surfaces are fewer field lines, and in cavities are the least field lines.

As a result most of the powder will gather on the corners and on sharp edges, and is it often difficult to inject the powder in small cavities.

The Tribo technique has less problems with the Faraday cage effect, because the powder particles are statically charged in the gun itself, and doesn’t use the active charge that the Corona technique uses. But due to a few major disadvantages of the Tribo guns, like lower spray capacity and longer cleaning time during color change, the Corona guns are most used.

By means of the correct settings of equipment, the Faraday cage effect can be reduced, but cannot be avoided completely. Hence, the operator must often squirt manually to fill cavities of objects. Because of this, the production process becomes more labor intensive, and thus more expensive. Therefore, it is now an often well practiced part during the design process, to avoid unnecessary cavities in products, in order to avoid insufficient coverage.

An important advantage of powder coating in contrast to liquid coatings, is that the recovered powder can be reused.

The powder particles leaving the cyclone (at the middle on the picture above) at the bottom side are returned to the storage tank. It is often assumed that all of the powder that ends up in the suction is fully recovered. In reality, it is only 80%, sometimes even less. This depends on the type of cyclone, and the condition of the filters in the extraction system.

If the filters are clogged, the air velocity in the cyclone will drop, and this diminishes the recovery power of the cyclone. As a result, larger amount of powder particles are also separated off as waste.

The cleaning of the cabin is a very significant efficacy. The quality of the cleaning has much influence on the quality of the final product. In modern installations, the color change procedure can be performed in less than 10 minutes, whereas with older systems sometimes takes up to an hour.